Who was George Dazey?

In February 1927, Mabel Normand was taken to by ambulance from her home in . She had been ill for weeks at home, her condition was dangerous but even in a rainstorm her doctors couldnt put off admitting her for treatment of a bronchial infection. Pneumonia was very serious at the time worse then it is today, it was life threading, Doctor H. C. Loos and Doctor George Dazey were her attending physician.

The name Loos is familiar, Anita Loos, wrote the initial scenario for Mabels film Mickey back in 1916 and she wrote so much more.  Her brother was Harry Clifford Loos; he was listed as Mabels family doctor.  Later Dr Loos in partnership with Donald Ross created the Ross-Loos Medical Group, one of the first HMO.

There were daily reports in the Los Angeles Times as to Mabels condition;

Times, 27 Crisis Past In Fight Of Film Star

Times, 27 Actress On Mend After Pneumonia

Mabel Normand, whose life hung in the balance for ten days from bronchial pneumonia, was reported to be convalescing rapidly in yesterday. Miss Normand will be able to leave the hospital in a week; it was announced by her physicians, Drs. George Daze and H. Clifford Loos. The film comedienne plans to spend several weeks resting in the desert climate at after leaving the hospital.

Times, 27 Comedienne Has Attack Of Pleurisy

The end of Mabels life had begun; she has again taken to from her in August.  When the X-ray in February showed that Mabel was suffering from an abscess of the right lung and broncho pneumonia there was little doubt that she was beyond recovery. Although some

people did recover, realistically she just wasnt strong enough but those who loved her hoped and believed that she would mend, hundreds of telegrams, telephone calls and flowers poured in from all over the country, this hope was alive until Mabel finally died in February of 1930.

In Patrick Jenning book Bay City Doctor, he wrote that Dazey supplied some stars with illicit narcotics, including Mabel Normand.  Dazey was unsuccessful in his suit against Mabels estate for unpaid doctors visits made to her home during 1927 & 1928. The suit was brought in 1931 and dismissed; Mabel had been dead for a year.  He was a man with a rather unsavory reputation.  He was scrambling for money, his wife Frances French was suing him for separate maintenance and complained that Dazey was living with a woman in . As his wife, she wanted her share of community property and support.  She said that his income was around $60,000 a year, the divorce was final in 1932.

Dazey second wife was the lovely young actress, Doris Sukow (Dazey).  Doris played the title role of Ramona in the pageant in .   Doris was only 31 when she was found dead of carbon monoxide gas poisoning in the garage of the Dazey Santa Monica home on 35; had given birth to a son just five months before her death, she was found near the exhaust pipe in negligee and kimono; the Coroner pronounced the case a suicide.

For the next four years, her baby, Walter lived with Doris parents in until after Dazey wanted custody. In 1938, Dazey had married for a third time, Dorcas Timmons (Dazey).

Once  family lost custody in 1939, a number of people contacted the D.A. Burton Fitts office reporting that it was in fact a murder, Fitts re-opened the case. 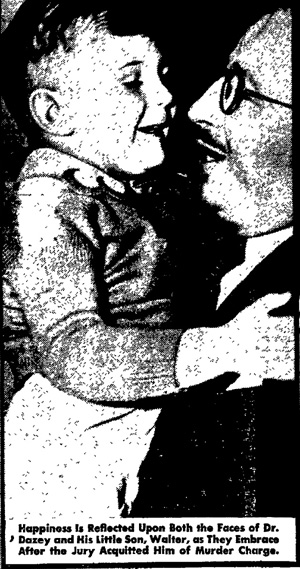 Dazey testified that had killed herself because she believed she had an incurable ailment. She had recently given birth to a son who was called Walter, her sister Mildred said that Dazey had threatened murder if the baby looks like a certain man. Mildred stated that Dazey thought that Walter might have been the son of  first husband, which she was purported to have continued to have a sexual relationship with.

The trial was mounted in to prove that Dazey killed but Dazey took the stand and the jury voted not guilty, he was acquitted.

Things didnt go well for the doctor, although he was found not guilty, the 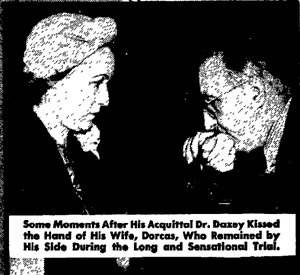 publicity connected with the trial virtually ended his medical practice. Many former friends thought that there was more fact to the accusations then could be explained by Dazey testimony. What would make all the witnesses form this elaborate conspiracy? There was some discussion in website by Loren Latken, regarding the possibility that Raymond Chandler might have used some of the facts of the Dazey murder trial in his novel The Lady In The . The post is well worth the read. http://homepage.mac.com/llatker/truecrime.html

His third marriage failed, and in 1943, George Dazey died of pneumonia.  The very medical condition for which he had treated Mabel. 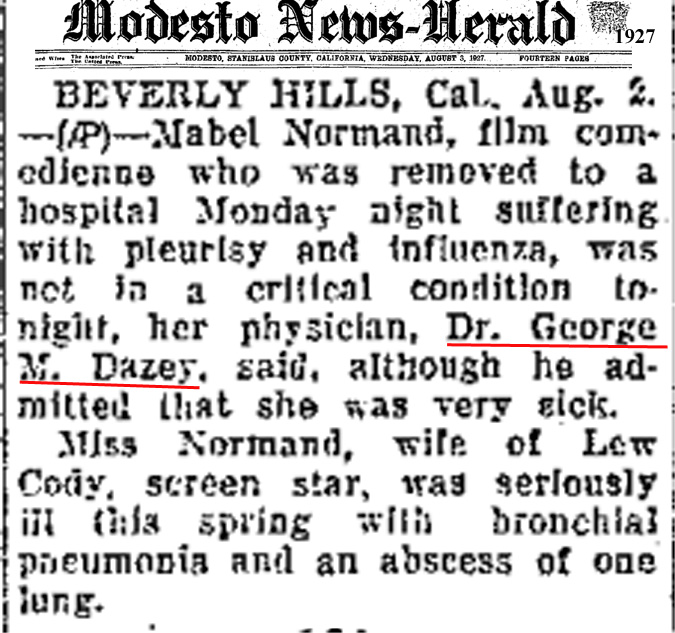